Before You Buy a Set of Bagpipes 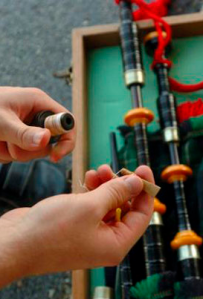 Before you buy a set of bagpipes…
Several years back, I got a call from a young relative of mine, a teenager at the time, who had found a “bargain” set of pretty bagpipes on eBay. He and his Dad hurriedly bought them before the end of the auction. After they arrived he called me all excited and enthused about learning to play. My worst fears were realized when I discovered, as I had suspected, that he did not find a bargain set of bagpipes at all, he got exactly what he paid for…CRAP.

Rule #1:  Never, ever, I repeat, never, ever buy a set of pipes on a whim. You would be surprised how many people start off by basically telling themselves, “Wow, I want to learn the pipes so I’d better buy a set and start learning”. I cannot express strongly enough what a mistake this is. A purchase at this early stage will almost inevitably end with a bad or shoddy investment and few are able to then recoup their loss.

Rule #3:  Start off with a nice, high quality practice chanter (See my “New Student Chanter Information” page). The practice chanter is relatively inexpensive and will be a valuable tool to you, not only as a beginner, but throughout your piping career. For my students and band members, I recommend one style chanter and reeds. This maintains uniformity for the group and subsequently tuning is quicker, leaving more time for actual practicing. If you plan to join a pipe band in your area, I would suggest you buy a chanter based on the recommendation of their Pipe Major.

Rule #4: Honestly evaluate your ability and desire to practice. Don’t even waste your money on a practice chanter if you can’t commit time to practice. This just isn’t the type instrument you can play once a week and really get anywhere. If you’re already stretched thin, this might not be the right time in your life to make this commitment. If you get bored or frustrated easily…proceed cautiously. The bagpipes have been said to be one of the hardest instruments to learn. By starting off learning with a practice chanter, you’ll get a feel for the time and effort that is needed and if you find you don’t like it or the timing in your life is wrong, your investment has been minimal.

Rule #5: Take lessons if you can. This is the best way to make progress. Your instructor will also be able to tell you when the time is right for you to move up to the actual pipes. Don’t be discouraged if it takes awhile. Going from the practice chanter to the pipes may take anywhere from 3 months to a year. Hopefully, by working through an instructor, you’ll have an opportunity to try out a variety of pipes before you buy.

Rule #6: Network. On average, 1 out of 10 pipe students stick with it, but, the ones who do love it and are usually happy to give good, sound advice, share tunes, etc. These pipers can be an invaluable resource to you. Many pipers can be found online. It’s best if they are in your area and you can actually visit with them. Everyone has their own opinions about pipes, music, just about anything, so talk to as many pipers as you can.

Rule #7: Buy Quality. There are many brands of pipes out there and some are better than others. Buy the best you can afford. Educate yourself on brands then weigh the cost against what you can spend, and choose the best set of pipes for you. If you decide to buy a used set of used pipes, always find out the manufacturer. If the seller does not know…don’t buy ‘em. If they describe the “wood” as being, anything but African Black Wood then look elsewhere. There are some pipes made of “Polypenco”, (instrument grade plastic), which is used for woodwind instruments today. These are a good idea for a beginner that may reach that point of buying a set of pipes but isn’t that dedicated. In most all cases they are less expensive than the African Blackwood sets. For a good set of bagpipes, even those that are used, expect to spend at least $500-$1,000.

My experiences and every encounter I have had with other pipers on this subject have led me to believe that you should never ever, I repeat, never ever buy a set of bagpipes made in Pakistan unless you just want something to hang on a wall. Pipes made in Pakistan are vastly substandard in quality compared to reputable pipes manufactured in Scotland, England, Ireland, Canada and the US. Many pipes from Pakistan aren’t even playable as was the case with my teenage relative.

When I opened the box and saw the Pakistan pipes he so proudly bought through eBay, the leather bag was rock-hard, completely non-pliable and the wood had no weight or density whatsoever. I set them up, seasoned the bag and tuned them as best I could. They made a noise, but that’s about as kind a description as I can make. My gut reaction was to tell him he needed to start a fire and put those pipes out of their misery. Bottom line: he tried a few times to make music from the Pakistan pipes and simply gave up. He lost his money, but what is more tragic is that he also lost his enthusiasm to learn the bagpipes without even giving himself a proper chance at success.