All the members of Freedom Trip 2019 have met and it looks like we hail from Massachusetts, Maryland, Colorado, Florida, Texas, and Tennessee.

Freedom Trip 2019 along with our friends from the Dublin Police Pipe Band (dark jackets).

We are on the road to Ghent today for our first practice as a band and a little sight-seeing. There are about 40 of us here in a tour bus along with a bunch of instruments, followed by 3 chase vehicles that others have rented. Everyone is in an optimistic mood and seems to have good, positive energy as we anticipate our first group practice. Sadly, today I’m not feeling quite as spry as I had hoped. I have one really bad knee and it’s the better of the two. They have not been my friends with all the walking I’ve done the past 2 days. To make matters worse, I’ve had a few curb and paver trips and stumbles because I’ve constantly been looking up at sights instead of where I’m going. Embarrassing and painful for sure. Soooo, as a result, my right knee is pretty swollen. I’m expecting to sail into a full blown face plant before it’s all said and done. I’m hoping that today’s practice will go really well and help me forget about my “old man” woes. 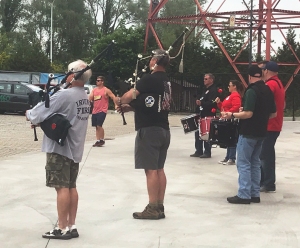 Ghent: While in Ghent we had a surprisingly good practice…especially when you consider that we are a diverse group coming together from so many different places and playing as a unit for the first time. The Dublin Police Pipes & Drums band guys were in town as well doing memorials of their own so we played them our “Irish set” and got a rousing thumbs up. They seemed like a very fun bunch. They told us that one of their group suffered a heart attack just the day before so several of us offered up our own personal prayers for him. Terrible news for anyone, but especially bad to have a heart attack while you’re traveling outside of your country. That really made me put my ‘ole knees in perspective.

Following practice we did what most firefighters would do…we toured the Belgium fire station. Life in their departments vs ours is not very different. Apparatus is different, but the life is the same. We were then taken to the center of town and released to explore the city. Wow, such an incredibly interesting place. Seems as though all cities here have a town square. These squares are filled to the brim with restaurants and beer venues. Grin! I tried the traditional Belgium stew (more like carne guisada than traditional US stew)…and it came with FRIES. Almost EVERYTHING comes with FRIES. Apparently the Belgiums invented fries and they are served with just about every dish. Their fries are prepared a little differently AND they dip theirs in mayonnaise instead of ketchup. I tried it just to try it, but I wasn’t a convert. Pass the Whataburger spicy ketchup please.

To stretch our legs, a group of us decided to visit the local Ghent castle built in 1180AD. This wasn’t a planned thing, but it turned out to be an amazing experience. At the castle we were given headphones with a choice of many different languages.

Of course I choose English and headed out. The audio tour took us to many different points of interest and illustrated how the design of the castle served a variety of defensive purposes. Made sense since castles are really all about defense. It was a very interesting tour and a great way to end our sight-seeing time in Ghent. Trying to get back to our “pick up” location, we made a wrong turn off the main square and ended up at the hotel of the Dublin Police Pipe Band. They were boarding their bus to leave. We inquired about their guy and were told that he was doing fine. He got a stint and was expected to be going home in a few days. These guys were an incredible group I wish we could have spent more time with. We shared their good news with our group as we finally met up and began our drive back to Brussels. Next morning will be early checkout and hitting the road again to perform at two memorial services near Bastogne. We will stop by Jack’s Woods and visit the site where the 101st Airborne (Band of Brothers) dug in during the Battle of the Bulge.